Nowadays, when you look around the standard American home kitchen, you will see dozens of cooking tools and appliances. To most home cooks, the number one equipment that is never lacking in the kitchen is the food processor. The invention of the food processor was meant so that methods such as shredding, grating, slicing, grinding, blending, mixing and pulverizing, would be done with ease. 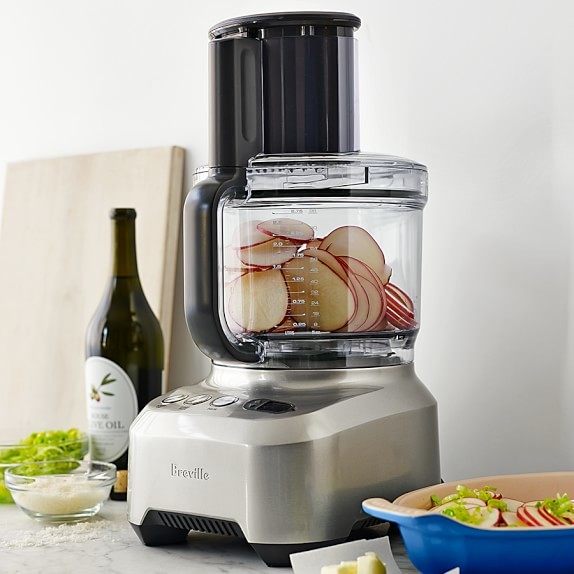 People would often secondhand themselves when buying a food processor because of its price tag in the market, and sometimes even compare it to food choppers and blenders. This kitchen appliance is  designed as their name suggests it— to be able to chop food ingredients. With these tools aiding you in your day-to-day cooking, it would inspire you to cook healthier meals for you and your family.

Food processors were developed in the late 20th century by Pierre Verdon as a way for cooks to be more efficient in the kitchen. The most common brands of food processors that are currently in the market are Breville, KitchenAid, and Cuisinart.

The YouTube channel, Eater, in its shows The Kitchen Gadget Test Show hosted by Esther Choi, put to the test three of the most well-known food processors to determine which is better. The show had four tests shredding, slicing, grinding of vegetables and mixing dough.

it’s complete with stainless steel chopping/mixing blades, dough blade, adjustable slicing disk, and reversible shredding disc. Along with its brand name, this is one of the most common food processors home kitchens around America have. When it comes to mixing/pulverizing, this 1500 watts of power came in first then the other two brands; it was consistent with both of its coarse and powder sides, and with the pie dough it did an even job. This food processor is currently in Amazon at a whopping $300.

It was the most expensive one out of the three compared brands. Currently, it is being sold in Amazon for $600; in the tests, it stood out as the best processor when it comes to chopping food ingredients. It gave less waste compared to the Cuisinart Elite 2.0, and it was consistent with its cuts. Having this in your home kitchen is like having a personal private sous chef complete with its heavy-duty 650-watt motor that helps in cutting large-sized vegetables. The most distinctive part of this processor is it's different sized lids to easily put a variety of vegetables without difficulty.

The brand that came in number one out of the other two. The lid of the processor has a smaller feed, which means the shredding is more controlled. Its cutting was consistent and had less waste compared to the KitchenAid food processor. Even with its pulverizing and grinding, the results showed evenness on both the fine side and the coarse side. It was tied with the Cuisinart Elite 2.0 with its consistency with the pie dough mixing test; the dough was even, with both flaky and crumbly bits. Right now, it is being sold in Amazon for $400, just between the price range of the Cuisinart and KitchenAid Food Processors.

The Difference with Food Choppers

If you haven’t noticed, food choppers are designed to be compact and small. This is just one of the major factors as to why people would often go for food choppers instead of food processors. There are two types of food choppers, manual choppers, and electric choppers. Much like the food processor, this was invented to help cooks with their day-to-day cooking without difficulty. 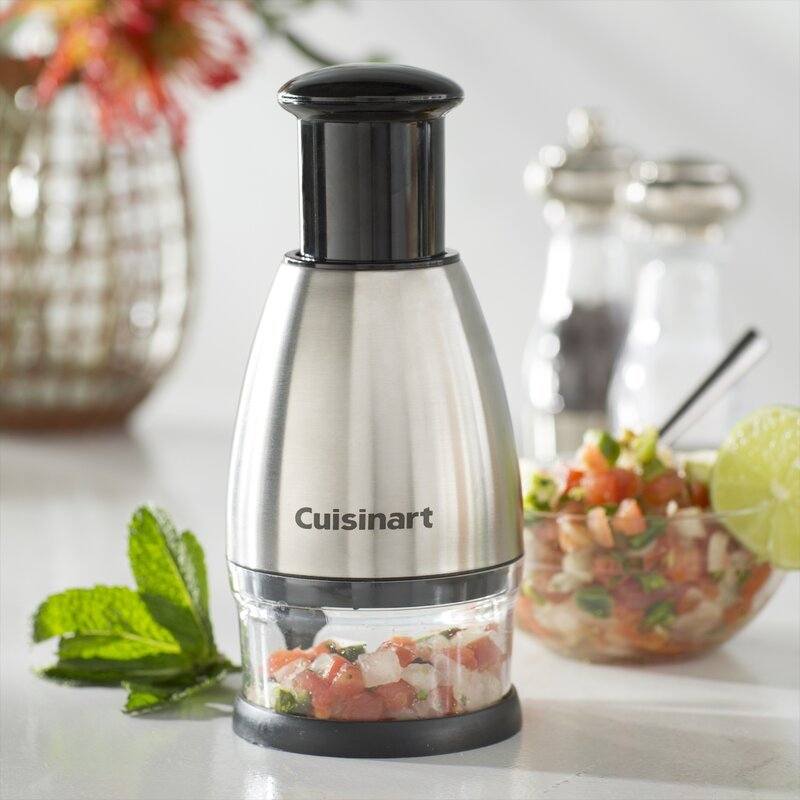 Check out our full list and reviews of food choppers or check out our quick recommendations below.

One of the most well-known branded food choppers in the market. This is an example of a manual chopper, where all you have to do is push down on the top of the chopper and watch the magic happens. With its base, it allows the cook to the chop without the cutting board, and because of its stainless steel exterior, it’s dishwasher friendly. Amazon has this product listed under $40, but reduced the price to only $13, with all of its good reviews this product is definitely worth the try.

If you are looking for something bigger than the Cuisinart, right now, Amazon is currently selling Kuhn Rikon Pull Food Chopper for a price of $32. The reason why this is way more expensive is because of its 2-cup size chopping capability and also of its pull-chop mechanism. It doesn’t have the difficulty of pushing down, especially on hard to cut ingredients, like the Cuisinart Food Chopper. All you have to do is pull multiple times and see how you want your cuts to be. It has 4.8 out of 5 stars compared to the 3.9 out of 5 stars of the Cuisinart in Amazon. 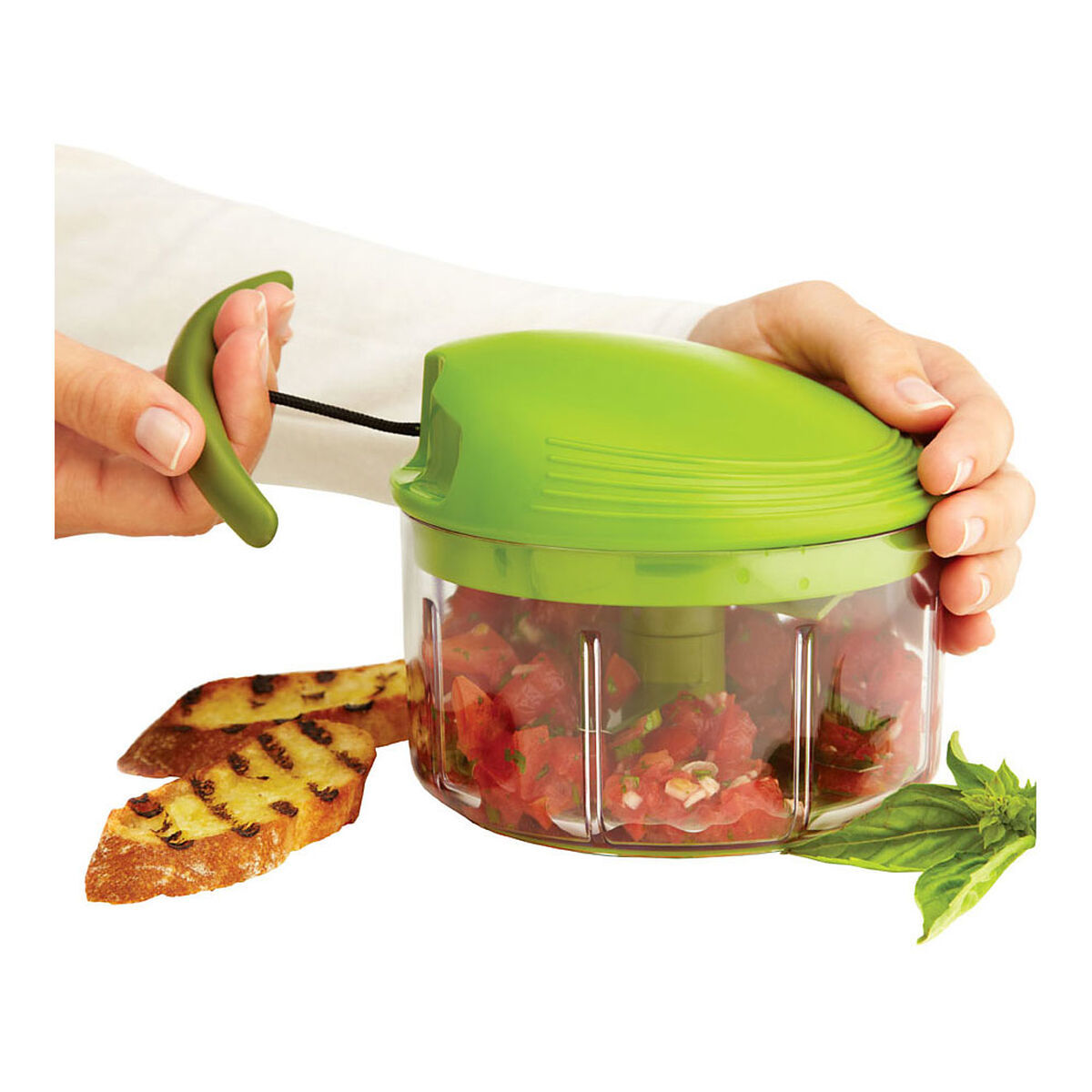 What about a blender?

Now, often people would compare the capabilities of both the food processor and food chopper to a regular blender. To clear this one out, the main purpose of a blender is to turn solid ingredients into liquid form. Nowadays though, some blenders are being made to be as powerful enough to handle the same capabilities as the food processor. VITAMIX 5200 Blender Professional is the perfect example of these modern blenders with the power of food processors. With its aircraft-grade stainless steel blades plus its improvement in horsepower, the VITAMIX Blender can cut, grind, blend, and pulverize like the Breville Sous Chef Food Processor. Amazon is currently selling this product at a price tag of $450.

So what should we get a Food Chopper or a Food Processor?

If you’re looking for a way to cook that is less time consuming, really helpful, easy to use,  and presents quality results, I would suggest to go with a food processor.

Food processors, food choppers, and blenders were made to do different things, but the superior kitchen equipment as described by Pamela Salzman, a cooking instructor known for her YouTube videos would suggest, go for the food processor.

A blender will only come in handy if you are trying to make a recipe that is liquid-based like smoothies, soups, dips, dressings, puree and sauces. Thinking about the price tags of these products, obviously food processors would cost so much more, but the benefits you would get would compensate for the amount of money paid.

I cannot stress enough on the possibility of eating healthier for you and your family because of the ease this product provides you in the kitchen.